We’ve all seen rainbows appear in the sky. But, how does one get there? 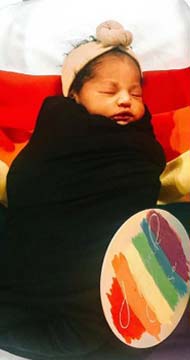 Simply put, the colors of a rainbow typically form when the sun begins to come out from behind the clouds, typically appearing after a storm.

Though Tanisha and Oscar Snell now hold their fourth child, “Rainbow Baby” Hayah Elise born Sept. 23, 2019 (whose name means “I am God’s Promise”), just like the storm that typically precedes a rainbow – they, too, had to get through a difficult time.

In a reflection, Tanisha wrote these words about her little boy Aaron Asher, “As he was in my arms, I gently snuggled him into my bosom. I cried as I quietly prayed and watched his heart rate continue to decrease. He took his last breaths in my arms. I then gave him to my husband and Dr. (Vick) DiCarlo (NICU physician) held him as Oscar held our lifeless baby and cried. It was the most powerful and powerless feeling ever.”

Tanisha, 28, and Oscar, 31, experienced the loss of Aaron Asher on Oct. 6, 2018, after an emergency C-section. Aaron Asher had developed Neonatal Respiratory Distress (NRDS), which caused rapid, shallow breathing and a sharp pulling in of the chest below and between the ribs with each breath.

“It was the most helpless I have ever felt in my life as being a father and looking at your son and not being able to do anything to help him,” Oscar said. 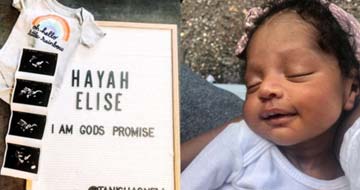 Though a very difficult time, this young couple would soon learn what a difference a year can make after receiving some good news.

Tanisha and Oscar recalled when they were able to tell their pastor Steve Green of More than Conquerors Faith Church that just three months after losing Aaron Asher, they were expecting.

“We found out we were pregnant just three months later in January and our pastor was excited for us and his ambiance really helped us,” Tanisha said. Oscar added, “I was so grateful to God for still blessing my wife’s womb.”

As the two look at Hayah, they share she’s a reflection of what her name means – “I am God’s Promise.” 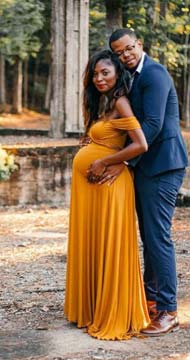 The couple of nine years credit their strong faith, devotion to each other and support of family and friends as ways they were able to endure such a difficult time.

Oscar shared this story about their faith journey: “It was about three years ago, we took family photos at an old iron works mill for a project called, ‘Beauty in your Ruins.’ It was a praise dance showcase meant to encourage others to find the beauty in the dark times of life.”

Unknowingly, Oscar and Tanisha would later learn firsthand the lesson they were teaching through that project.

“Some time after, when we were deciding to do maternity photos with Hayah, we went back to the iron works mill because it was so fitting. I believe three years ago when we did that project, God was preparing us. I thought, wow, God You are so masterful and all-knowing in what You were doing, it makes me believe so much more radical now,” he said.

Not only did this life lesson impact Tanisha and Oscar, but they have two other children Keelan, 8, and Kadance, 6, who had to learn their little brother wouldn’t be coming home.

“I really believe Hayah is a result of Kadence’s prayers because she would pray for us to have another baby,” Tanisha shared. “Her faith is so strong.” 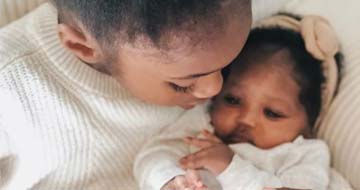 While not visible or evident by their faith-filled conversations and cheerful spirits, Tanisha and Oscar have experienced a great deal at their young ages including the loss of their moms in the last five years to cancer. The two also take care of Oscar’s dad, who went blind in the year that Oscar’s mom was passing away.

Another illustration of the beauty in their story is Tanisha’s quest to share and inspire other women. “Through social media, I have been to talk to other women who have experienced infant loss and encourage them in their journey,” she said.

As Oscar watched his wife encourage others, he said, in turn, it has encouraged him. 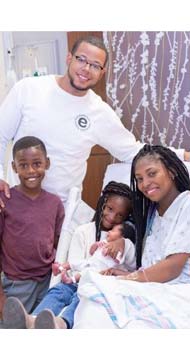 “She cried sometime, but she was still so put together and handled everything with so much grace,” Oscar said. “She just has a way to speak into my spirit and lift me up. That’s why I told her, she’s stuck with me.” He said with a smile.

So this Oct. 6, was very different for the Snell family. While still a time to remember their little boy Aaron Asher, they were also rejoicing in the blessing of their new little girl, Hayah.

“It’s not that she can replace Aaron Asher, it was the fact that she can fill the void in our family after losing him,” Oscar said.

“We needed her,” Tanisha added.

Tanisha is a patient of Dr. Jack Freeman, OBGYN with Brookwood Baptist, and credited him with amazing patient care.

Oscar said, “Everyone comes in very nice and so professional. I am amazed at how well the team has the times worked out for things to take place and how everyone works so well together.”

“We didn’t ask for pity from anyone. They genuinely just care,” Tanisha said.

Love the Snell Family as much as we do? Tune in to the next post and learn more about their patient experience at Brookwood Baptist.