Video games are a common pastime for many children nowadays and these fifth graders from Brookwood Forest Elementary learned how some of those gaming skills may come in handy one day.

“We are learning how the robot helps people and how it helps the doctor during surgery,” Addison Trundt, fifth-grade student said.

This team has already built their robot at school and has advanced to the state competition that will take place in Auburn at the end of February. As a part of the state competition, the group had to complete a video project and they chose the use of robots in healthcare.

“These students got a unique opportunity to tour a robotic operating room to learn how we use robotics in medicine and they also got to take the robot for a test drive (in a pre-arranged demo),” Dr. Brent Parnell, urogynecologist affliated with the Women's Medical Center said. “We hope they have learned more about how robotics can be applied practically in real life specifically in medicine.”

In 2019, the Women’s Center at Brookwood Baptist reached a milestone of completing nearly 8,000 robotic minimally invasive GYN surgeries, including over 6,000 hysterectomies.

“I love robotics and I love video games and this is a neat place where video game skills and robotics collide to give kids an opportunity to use something they do for fun to be productive,” Dr. Parnell said. He went on to say many schools teach students about robotics by making the video game comparison.

The students were escorted by parent volunteer Susan Rathmell, whose son is on the robotics team, and see expressed sincere thanks to Dr. Parnell and the team at the Women’s Center for welcoming the students.

“I am so thankful to Dr. Parnell for volunteering his time to demonstrate how the robot works for our fifth graders and I know that it will make a lasting impression and who knows where it will lead them in their future careers,” she said.

It was obvious the experience did leave an impression on the students as Addison had this to say to Dr. Parnell and the team, “Thank you for doing this, most people wouldn’t do this, so thank you!”

We wish these students the best of luck as they go to compete at state next month! 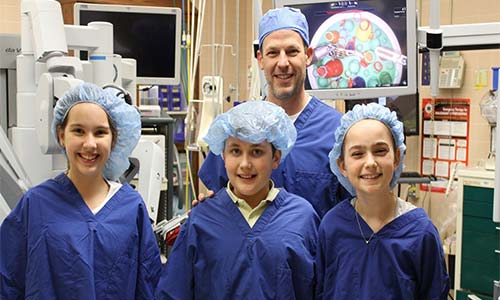