Skip to main content and our Accessibility Statement may be found in the footer of our website.
Back To Stories
{{CTAButtonText}}


When expectant mother Melissa Grundt (a proud supporter of Alabama football) learned she was due during football season, one of her initial thoughts was: “I cannot have her during the Iron Bowl!” #priorities

Little did Melissa know that giving birth during the Iron Bowl would be the least of her worries months down the road.

It was October 2000 when, Melissa at 32 weeks pregnant traveled 400 miles from her home in southeast Georgia to Birmingham to visit a few friends before welcoming her new baby into the world.

“My OBGYN had been pleased with the progression of my pregnancy to that point,” Melissa remembers. “She decided that it would be completely fine for me to go.”

When Melissa arrived in Birmingham, she immediately headed out to dinner with friends, came home and went to bed. Everything was fine.

But a few hours later, Melissa woke up with unexpected contractions.

“Thankfully,” Melissa says, “I was staying with a friend who had delivered a preemie at Brookwood two years prior. She shuffled me off to Brookwood and assured me I would be in excellent hands there.”

Once at Brookwood, Melissa was seen by Dr. Lance Radbill of OBGYN South, who after checking Melissa determined she was too far along to leave the hospital. At that time, neonatal physician Dr. Martha Strange was brought onto the case to help care for the baby once she was born. Dr. Strange estimated that at only 32-weeks, the baby would remain in the NICU for at least a month. 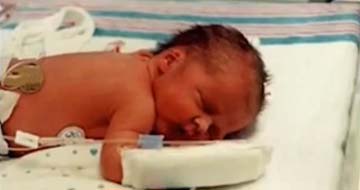 A few hours later, on October 8, 2000, Melissa’s baby decided it was time make her big debut. Only weighing about five pounds, Baby Madeline came out breathing on her own, screaming at the top of her lungs, none of the things the physicians had expected her to do.

In fact, Dr. Strange could not identify a reason to keep Madeline in the NICU more than just a few days.

“By some miracle, she only spent eight days in the NICU and was then cleared to go home,” Melissa says.

But before they started the 10 hour drive back home to Georgia, Melissa had to make one crucial stop.

“I went to the Galleria [in Hoover, a town about ten minutes away from the hospital] and bought Madeline a little baby Alabama hat. It was the first piece of clothing she ever wore outside of the NICU,” Melissa says proudly.

Looking back on it now, Melissa reports that Madeline “grew like a weed, and has continued to amaze us over the years.” 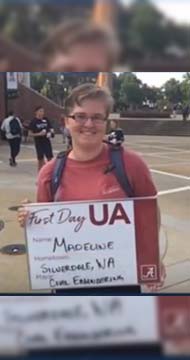 Most recently, Madeline surprised everyone when she submitted a college application to the University of Alabama. It came to a complete shock to everyone that Alabama was on her radar. With Madeline’s father serving in the US Navy, the Grundt family bounced around all over country and had never made it back to Alabama since Madeline's birth.  But Madeline had an unspoken desire to return to her birth state, and when she received her acceptance letter, she celebrated and said, “I might as well go! I was born there, but have never lived there. It only seems appropriate.”

On August 22, 2018, Madeline started her college experience at the University of Alabama in Tuscaloosa, finally returning to the state where she was born almost 18 years ago, a full year ahead of schedule.

“I would like to give a thank you to the entire staff of Brookwood,” Melissa says today. “We received such excellent care when our little bundle of joy decided she needed to be born in Alabama, all those years ago.”

Madeline started her first day at UA earlier this fall. Best of luck to you, Madeline!

ABC 33/40 was interested in Melissa's story and sent a crew down to Tuscaloosa to chat with her during her visit with Madeline for the Thanksgiving holidays!