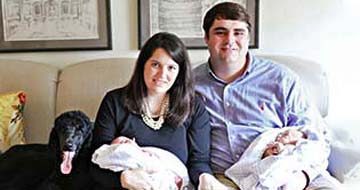 Marvelous Multiples® covers several topics from having a healthy pregnancy to what to expect when the babies are home.

Jamie Henderson took the class in the summer of 2016 when she was pregnant with her twins, Thomas and Sully.

“After a long journey of infertility, we knew there was a possibility of having multiples,” she said. “So I was researching and found the Marvelous Multiples® class on Brookwood’s website.”

After signing up for the course, Jamie found a sense of community among the other couples in the class. She began the class about 20 weeks into her pregnancy and said she benefitted from topics covered in the class related to labor, delivery and signs of potential complications.

“The class was truly is a blessing; it helps to calm your fears,” Jamie said.

In addition to Marvelous Multiples®, Jamie is a member of the Birmingham Area Mothers of Multiples, a group with a strong connection to the class.

“The Mothers of Multiples group sends a representative to every class, because we want to create a support system for the moms,” she said.

Because caring for multiples requires an “all hands on deck” approach, Jamie’s husband, John, also attended the course where they both benefitted from learning more about breastfeeding, having a support system and taking breaks from caregiving. The class also covered more sensitive topics, including whether or not you will have a favorite child.

“The class was supportive and very real,” she said. “I always wondered do you have a favorite? These are all real questions that are discussed in the class.”

Raising one baby is no easy task, so one can imagine caring for two or more can feel overwhelming at times. Jamie said it was reassuring when the class instructor told mothers that taking a break is OK and can make a world of difference.

“Raising our twins has been an incredible journey. There have been some hard days, but I’m so thankful for them. They are a great addition to our family,” Jamie said.

In her spare time, Jamie remains active in the community and reaches out to new moms of multiples to encourage them on their journey. In addition, as a former patient of Dr. Beth Malizia at Alabama Fertility Specialists, she also loves to share hope to moms struggling with infertility.

“Dr. Malizia is an incredible physician and helped give us our miracles,” she said about her 17-month old twin boys. “I want to help other mothers so they don’t feel like they have to struggle in silence,” she said. “Everyone needs community.”