“You know, I’ve been around kids my whole life. I worked at a daycare for seven years, I have two nieces, and I just love kids. Then, I started to see all my friends start to have kids and I thought for sure I would have them by now. But, then I found out I couldn’t. Sure, I had the thoughts…God, why me? But, I learned everything happens for a reason.” – Callie Elliott, Patient of ART Fertility Program 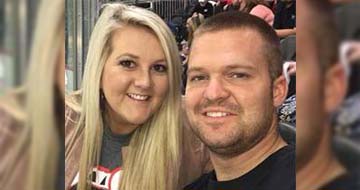 Callie Elliott, 29, married her high school sweetheart Brad, 30, on May 4, 2013. Two years into their marriage, the couple decided they were ready to welcome a new addition.

But, for this young couple, it didn’t come so easily.

“I have been under the care of Dr. (Greg) Banks (OBGYN with Alabama Women’s Specialists at Brookwood Baptist) since I was about 10 or 11 years old. I love him because he makes me feel like I’m a part of his family. He is just a great Christian man,” she said. Callie battled endometriosis and had polycystic ovarian syndrome that both contributed to her infertility.

She eventually landed in the care of Dr. Kathryn L. Honea with the ART Fertility of Alabama. Brad and Callie shared that even before meeting Dr. Honea, the pleasant spirit of the ART staff let them know they were in the right place.

“I’ve had blood taken before and usually the people are dry and are like ‘hey, how are you? (Brad said imitating a dry tone)’ but the people at ART were so excited you were there. It was almost like a Chick-Fil-A attendant atmosphere,” Brad said. Callie added, “And, when Dr. Honea prayed with us, we knew we were in good hands.”

To start, the Elliotts began a treatment option called, “Intrauterine insemination (IUI)” which involves placing sperm inside a woman's uterus to facilitate fertilization.

“Three times I had to hear ‘I’m sorry to let you know the IUI didn’t work’. It was an emotional time, but then we decided to go in the direction of IVF,” Callie said.

IVF or in vitro fertilization, involves extracting eggs, retrieving a sperm sample, and then manually combining an egg and sperm in a laboratory dish to later be transferred into the uterus.

And as a part of the process, it would require Callie to face her fear of needles with the at-home injections.

Luckily, she enlisted “Nurse Brad (i.e. her husband)” for assistance and aside from the memorable funny story of Callie running from Brad as he held the injection needle, Callie later became a trooper and kept the goal in sight.

“Transfer Day was another big milestone for us. It was definitely a hopeful time,” Callie said. This is the day the fertilized egg is placed into the woman. 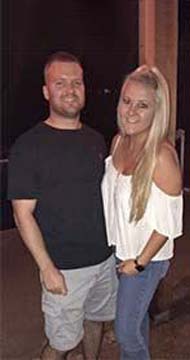 Then after a blood test, Callie would learn if she was pregnant. After being told “no” so many times, in hindsight, Callie said she realizes God knew exactly what He was doing.

“During this process, Brad applied for a job at a major employer in town climbing poles that were roughly 30 feet. This company was known for favoring former military (Brad was in the Air Force, and when he got out of the service he worked for a tower company climbing 300 foot cell phone towers) so we just knew he would get the job, but he didn’t,” she said.

The Elliotts wondered why this would happen amidst all the emotional ups and downs. But, the blessing is that later Brad joined a small company who was extremely supportive of all the times Brad would need to leave to join Callie for appointments.

“My boss and I now talk a lot, and he knows what was going on and was so supportive. It would have been so much more stressful if I had gotten the other job,” Brad said. Callie went on to add, “God always has a plan for you. After everything with that, we realized to trust God’s timing too. He knew what he was doing.”

After nearly a three year long infertility journey, Callie received a phone call from her nurse at ART. Though scared to answer because in the past on the other side of the phone was disappointment, her friends at work convinced her to answer.

This time that phone call went something like this: 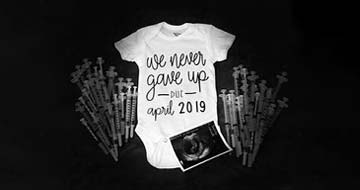 NURSE: Hey, Callie, how are you doing today?

Callie: I’m doing good, how are you?

NURSE: Well, I was just calling to congratulate you on your pregnancy!

And, immediately Callie was overwhelmed with tears and emotion and later called Brad to share the news with him. Tears of joy also came from Brad, because they were about to embark on a new journey for the next nine months.

*Disclaimer – These results are based on this couples’ experience. We recognized everyone is different and results may vary based on parties involved.